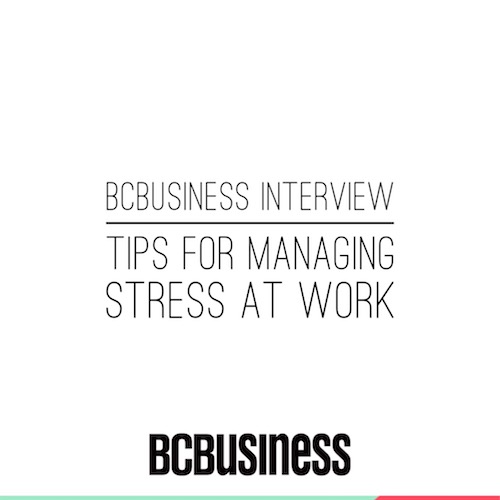 Tips for managing stress at work

Before discussing stress leave in the workplace, it’s important to note that, legally speaking, there’s no such thing…

Christian Codrington, B.C. Human Resources Management Association senior manager, and Kelly Slade-Kerr, lawyer with Hamilton Howell Bain & Gould Employment Lawyers, both maintain that “sick leave” is the proper—and only—term that should be used to describe the type of leave that employees seek when they are not mentally fit to work. “By calling things ‘stress leave,’ I think we devalue it or make it really convenient for people to say, ‘Well, things are tough, I need some time away,’” says Codrington. Under the law, they say, a person who is stressed out is not entitled to any legal protection.

Claiming sick leave requires a note from a physician with a diagnosis for a mental illness, which can include depression symptoms resulting from the grieving process or a traumatic life event. “A divorce is a perfect example,” says Slade-Kerr. “It would be very rare for someone who is suffering the effects of a divorce—to the extent that they can’t work—for them not to be diagnosed with some kind of condition.” Although dealing with heightened stress in and out of the workplace is not cause to claim leave, a diagnosable mental illness arising from those stressors is.

Slade-Kerr says employers are at risk of being on the wrong side of the law when they make assumptions about an employee’s sick leave. She often deals with wrongful dismissal cases that result from employees being terminated for unrelated causes, such as downsizing, upon their sick-leave return. In her 15 years of practising law, Slade-Kerr estimates seeing maybe one case where the employee appeared to be abusing the system: “Employers should always come from the perspective that the illness is legitimate, because that’s going to keep you out of trouble at the end of the day.”

The BCHRMA’s Codrington adds that employers should not be concerned with policing for the tiny percentage of employees who take advantage of the system, but rather they should demonstrate trust and encourage open dialogue. “Be careful not to manage by exceptions,” he advises.

It is also incumbent upon employees to be open with employers about any issues that are affecting their ability to perform the job. Codrington says small businesses have an advantage in this regard because they are less reliant on formal procedures and large departments, which can often make employees feel like they’re being kept at arm’s length from the decision-makers. Encouraging a trusting culture where communication lines are open, from top to bottom, is the first step to avoiding confusion and misunderstanding around sick leave.

If an employer suspects their employee of a false claim, they should proceed with caution, relying only on objective medical information and facts—and never impressions. “Mental illnesses are called silent disabilities. They’re not well understood and there’s also a stigma attached to them,” says Slade-Kerr. “If you are very open about respecting people’s human rights and your duties to accommodate, that’s going to make more of an open culture where employees feel that they can come forward.”

Codrington recommends asking the employee work-related, functional questions: “When can you come back? What can you do when you come back? We need to plan around you, so give us an idea of your expected departures and how long we can expect that for.” In the end, he says, it comes down to one level of intervention: starting a respectful dialogue with your staff.

With a healthy lifestyle, the right mindset and a focus on avoid so-called hidden stressors, you can beat stress in the workplace—and everywhere else. Sound like a tall order? For wellness educator Nicole Porter, the key to living a stress-free life is to remember that everything is manageable.

Vancouver-based Porter points to studies out of universities like Stanford and Harvard that show that 90 to 95 per cent of disease is stress-related.

“Our society is diseased right and left, but so much of it is controllable,” she says, noting that people often overreact to problems that everyone has or those that can be managed with the right outlook. “I’m tired of people getting sick; it’s sad, and really, they’ve got more control than they think.”

Instead of concentrating on things that cause immense stress in the workplace and at home, Porter argues, people need to think about the hidden stressors that are wreaking havoc beneath the surface. Here are three of the most harmful—and her tips for handling them.

Get off that screen

“People need to take breaks from their screens,” Porter says. “And I mean, like, a full-on break—I don’t mean getting away from your desktop and going for a 10-minute walk while you check your email on your phone. Go for a walk and get away from your screens, period.”

Though that may be hard and somewhat unrealistic for many of us, Porter insists that time away from the glaring lights of our laptops, tablets and smartphones is crucial. Constant exposure to screens overloads the nervous system, she explains.

“We’re overstimulated anyway, with all the sounds and everything,” Porter says. “There’s a ding or a sound for almost everything. And it causes stress, whether we think about it or not.”

Porter also points out that even though it’s become a bit of a cliché, people don’t drink enough water.

“If you’re not drinking enough water, you’re dehydrated, and that dehydration is a source of stress on the body,” she says. “We release all these hormones that are related to disease. Your body doesn’t know whether you’ve just had a fight with your partner or if you’ve just had two glasses of water since yesterday. Stress is stress.”

The last hidden stressor that Porter identifies is one that all of us have had run-ins with at one time or another: “A big one is people dieting. And I know that’s not necessarily a work thing, but depending on what your role is and how much balance you have at the office, people miss meals, most people are on a diet of some sort anyway, so they’re cutting. When you go on a low-carb diet or a high-protein diet, those are stresses, too. Your body needs to be nourished, and if your body is having to work overtime, then it’s under stress.”

Porter suggests eating foods that aren’t packaged, encouraging her clients to choose organic or pesticide-free fruits and hormone-free meats. She also counsels them to avoid sugar whenever possible.

“If someone is drinking coffee and is reaching for the white sugar, I’m OK if you want to add something sweeter, but replace it with unpasteurized honey or maple syrup; that’s natural,” she says.

The most stressful job?

Asked whether there’s a profession she deals with more than others, Porter doesn’t hesitate.

“Realtors are a unique group because they are driving a lot, which is stressful,” she says. “They’re often eating on the go. When you’re driving and eating, or texting and eating, or working and eating, which so many of us do, it’s a form of stress on your body, so you can’t digest your food properly, so all of your cells are not getting the nutrients they need to optimally function.”

Porter also cites the amount of work that realtors often do at night as an unhealthy reality.

“Your cortisone levels should be high in the morning and then taper off during the day,” she says. So if you’re negotiating at 10 o’clock at night, it’s not good. Not good for your sleep, not good for anything.” —the Editors